Additive manufacturing, 3D printing in the world of mass production

The use of printing technologies for industrial manufacturing processes in microfabrication has long been considered the holy grail for 3D printing. Companies have certainly tried, but existing technologies such as traditional inkjet printing have not been able to deliver the ultra-high resolution and placement accuracy that is needed to be effective and affordable.

Flash forward to today and there is a wide range of new technologies on the horizon that have the potential to transform many markets, and most notably the semiconductor and display industries. Clearly, we have entered the age where digital printing has successfully expanded from graphical into 3D printing of geometrical objects and is now about to make the next quantum leap by enabling functional printing of microelectronic products.

As microfabrication-based industries such as the display market start to realize the benefits of additive manufacturing, producers of printing machinery are asked to deliver a printing technology that can yield 100 times finer detail than those of a conventional graphical print. In the case of inkjet printing, the left-hand schematic below illustrates the way conventional technology works: Liquid is pressed from the inside of fine nozzles, creating tiny ink droplets. 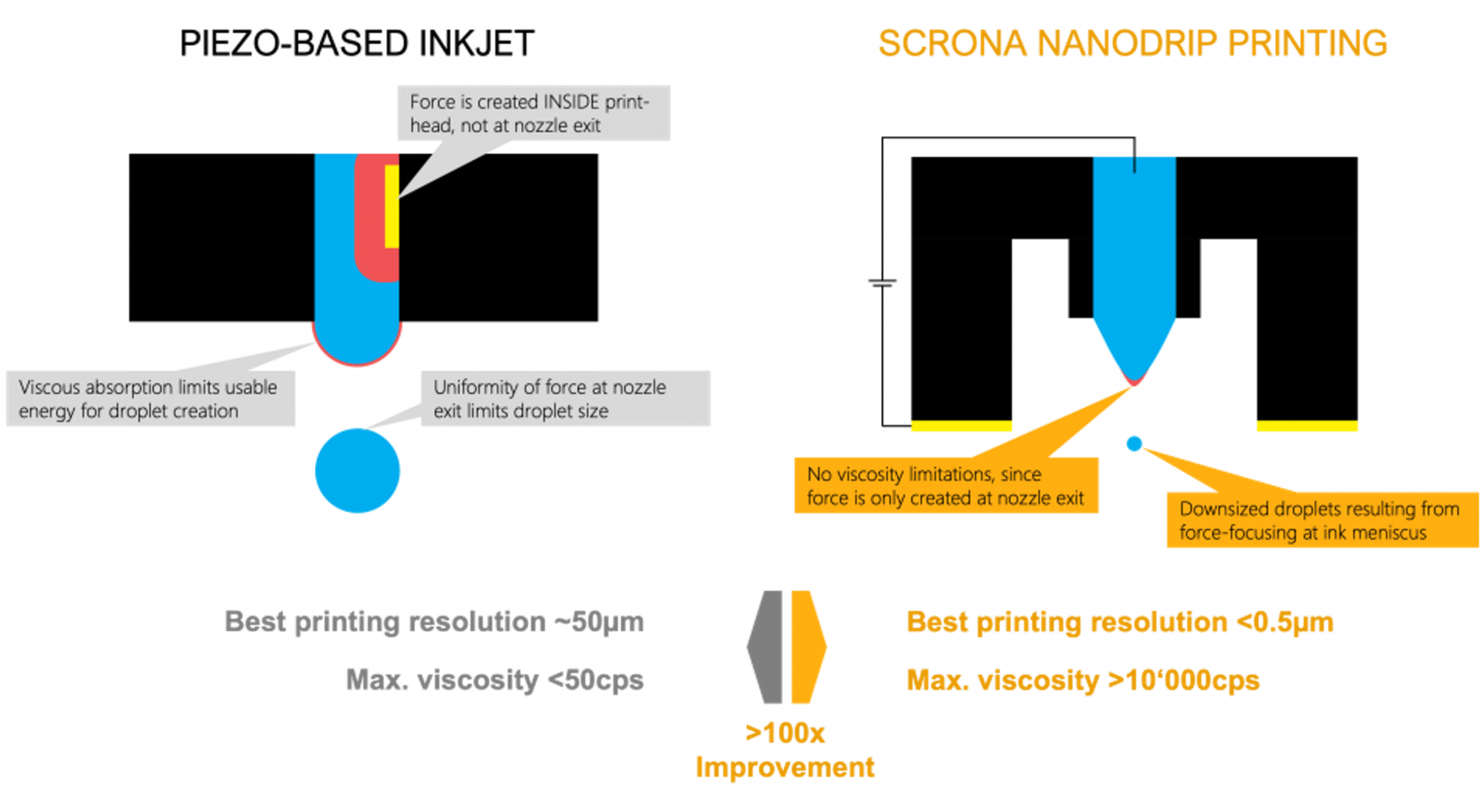 Figure 1 The image above highlights the performance parameters and differences between conventional piezo-based inkjet printing and the new electrostatic technology. Source: Scrona AG

The problem with the traditional actuation process is that it only allows the ejection of thin inks, which are then flattened on the substrate due to their high fluidic content. The actuated droplets are no smaller than the size of the nozzle from which they were ejected. This conventional pushing concept physically limits nozzle sizes to a few tens of micrometers and thereby makes it difficult to reach the ultra-high resolution that is needed for microfabrication.

A new and alternative approach is to use an electrostatic force that pulls the liquid out of the nozzle, forming a pointed cone and focusing all energy to the tip of that cone. It is from this tiny tip that small droplets are ejected, accelerated and guided downward. Due to the force-focusing effect, droplets are no more limited to the size of the nozzle, but can in fact downscale more than 10 times.

Since no force needs to be guided to the nozzle exit from the inside of the nozzle, the technology becomes essentially agnostic to ink thickness, allowing both thin and thick fluids to be processed almost equally. Small droplets can be placed accurately onto the substrate and the small volumes dry quickly and form into 3D projects smaller than 1 µm.

Because the electrostatic ejection principle is more or less ink-agnostic, it opens the door to use a wide variety of inks. These inks can be at least 100x more viscous than inks used in today’s conventional inkjet printheads. In theory, it could even be possible to print with honey. This ability to print with many types of fluid expands use cases besides typical nanoparticle metal inks into a wide range of materials, such as:

Through this new process, the expensive treatments of inks to make their rheology compatible with inkjet printheads become obsolete. While one single nozzle already demonstrates unseen performance for microfabrication, an economic usage only becomes viable by replicating these nozzles 1,000x times using a single microfabricated MEMS chip.

This enables the digital microfabrication of functional elements printed from multiple materials in a resolution invisible to the naked eye. That, in turn, allows the development of products we have only envisioned. One example is an invisible touchscreen that could be printed as fast and economical as printing an image on a typical office printer today. This capability has the potential to revolutionize the fabrication of semiconductors, displays, and many other similar products.

The ability to print on any material, at scale, can improve the speed, accuracy and cost of producing innovative products for today and tomorrow. The semiconductor and display manufacturing industries are ideal targets for additive manufacturing to reduce their complexity, high-cost as well as high-water and energy usage while delivering the high resolution needed.

As the below graphics depicts, this could reduce manufacturing steps of certain semiconductor back-end components 10-fold, while also significantly reducing material, energy and water usage. With multiple steps—over 20 required for one single component on a semiconductor device—fabrication can take up to 15 weeks, with 11–13 weeks being the industry average. In addition, a semiconductor fab may use between 2 to 4 million gallons of ultra-pure water (UPW) every day, which is approximately equivalent to the water use of 40 thousand households.

Other markets can also be transformed by this type of technology. For instance, the yet unseen resolution and layer thickness control can enable printing of quantum dot RGB color filters for high-brightness, full-color micro-LED displays in augmented reality glasses for gaming and metaverse applications. It can also be used for PCB/printed electronics, MEMS and sensors, life sciences, and security printing.

Leveraging electrostatic ejection principles, it is possible to achieve simultaneous printing from a large nozzle array, with the following advantages compared to conventional inkjet:

The unique combination of high resolution and high throughput has the potential to reinvent micromanufacturing for mass production, speeding product invention in an economical and eco-friendly way. This is a quantum leap for a wide range of industries from semiconductors to molecular printing in biotechnology.