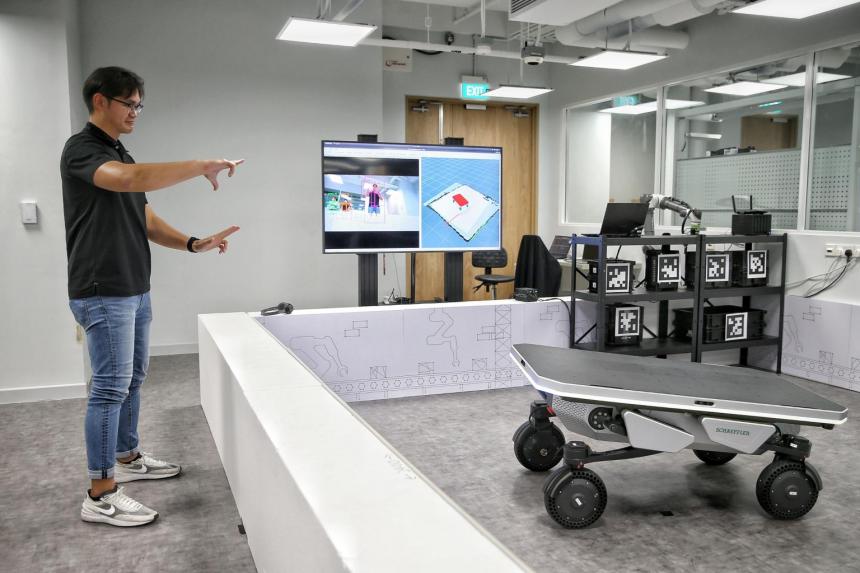 The Schaeffler Hub for Advanced Research at NTU aims to accelerate innovation in the areas of future mobility, robotics and Industry 4.0. ST PHOTO: FELINE LIM

SINGAPORE - A video and analytics system that monitors humans and their robot co-workers in a factory, and sounds an alarm when an accident is about to occur.

A robot arm carrying a heavy load that immediately stops when it touches a person in its way, thereby avoiding any collision and potential injury.

These are some potential applications of the projects currently in development at a joint research facility by Schaeffler, a supplier for the automotive and industrial sectors, and Nanyang Technological University (NTU).

An expansion of the lab, known as Schaeffler Hub for Advanced Research (Share) at NTU, was officially launched on Thursday (May 5).

Under the expansion, Share at NTU aims to accelerate innovation in the areas of future mobility, robotics and Industry 4.0, which refers to a new phase in industrial revolution that focuses heavily on interconnectivity, automation, machine learning and real-time data.

Researchers from Schaeffler and NTU - including undergraduates, postgraduate students and PhD candidates across NTU's various engineering and technological disciplines - will be involved in developing solutions for industries, including manufacturing.

Current projects at the lab include an autonomous wheeled robot that responds to voice and hand gesture commands, and is equipped with cameras to detect obstacles around it.

The robot, which can carry loads and tilt its legs to navigate slopes, has the potential to be used in a variety of sectors, such as logistics and healthcare.

In his speech at Thursday's event, NTU president Subra Suresh said Industry 4.0 is causing factories to move towards a high level of collaboration between human workers and industrial robots.

"By converging robots with Industrial Internet of Things, machine learning and data analytics, these technological solutions help to improve efficiency and productivity in manufacturing," he said.

For example, robots will be able to help improve workers' health and safety by taking charge of risky and repetitive operations with high accuracy, speed and repeatability.

On the other hand, human workers have the flexibility and sensibility to adapt to new tasks and to improve the quality of manufacturing operations, due to their cognitive skills.

"These solutions will help to alleviate some of the challenges faced by tight labour markets such as Singapore, where manufacturing represents a significant component of the nation's gross domestic product - approximately 20 per cent and currently standing at $106 billion," said Prof Suresh.

Mr Dharmesh Arora, chief executive of Schaeffler Asia Pacific, said while industrial automation may be one of Schaeffler's focus areas in applying technological solutions, it does not stop the firm from looking to do so in other industries such as healthcare and agriculture.

The lab's expansion builds on an earlier partnership between Schaeffler and NTU, which focuses on research and development of smart mobility devices to tackle transportation challenges.

It was through this partnership that the lab was set up in 2017.

To date, the collaboration has led to the implementation of a fully functional personal mobility device prototype, among other developments.

Research from iBASEt shows that manufacturing productivity falls behind when a business lacks...

When to use 3D printing for mass production

Additive manufacturing has come a long way since the 1980s. Though many believe the value of 3D...

The dental industry has made great advances in recent years thanks to the incorporation...

“Engineering a green future: How IoT can help.”

It’s not news anymore that climate-related events gravely impact more than 1 in 4...