Farsoon has announced its global install base of polymer and metal 3D printing systems now exceeds 500.

The company has also said that there is an additional 200+ additive manufacturing machines installed as development or demo systems.

Of the 500 machines installed at customer sites, Farsoon has confirmed there is a 50/50 split between metal and polymer systems, with more than 150 machines in operation at service providers around the world, and over 80 metal 3D printing platforms being installed within the automotive and aerospace sectors. Companies like Falcontech and WeNext have so far built up fleets of Farsoon 3D printing systems totalling 18 and 11, respectively, with the former is planning on an additional 30+ installations.

Reaching this significant milestone comes after Farsoon’s sustained efforts to enhance its additive manufacturing offering to facilitate the industrial application of the technology. Metal 3D printing was introduced to the Farsoon portfolio six years ago, while the company has also added a new line of machines under its Continuous Additive Manufacturing Solutions (CAMS) concept in 2017 and introduced its high-speed ‘Flight’ polymer laser sintering technology in 2019. 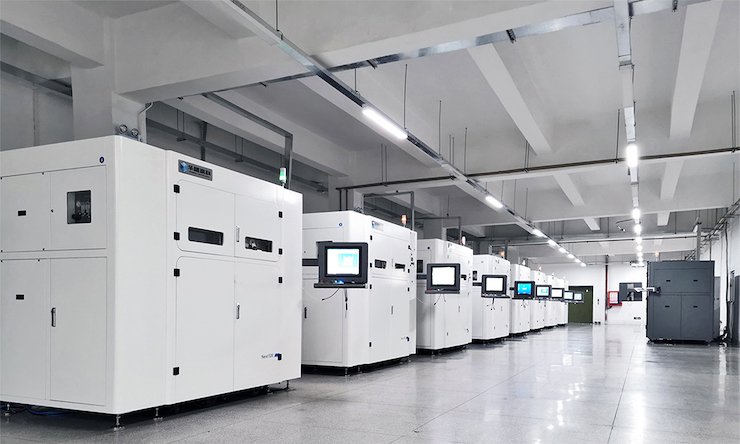 “We are seeing an increasing demand of large volume functional parts fabrication, especially in aerospace and automotive industries, using specialised materials in order to achieve designated performance tolerances, mechanical properties and reliability under a variety of operational conditions,” commented Don Xu, Director of Farsoon’s Global Business Group. “In order to address customers’ pain points around size, productivity and quality, Farsoon has been introducing the multi-lasers, large-format metal systems FS421M, FS621M, as well as the latest FS721M to the market. Till today, Farsoon has achieved more than 80 large-format metal systems (build platform >400mm) installation in aerospace and automotive industries.”

“Although our metal 3D printer product line only commercialised in 2015, with the rapid rise of the civil aerospace industry as well as its manufacturing ecosystem, we now see the metal and polymer systems contribute equally 50%-50% in number amongst our 500 plus installations,” added Jack Cheng, Deputy General Manager of Farsoon.

In line with its growing install base, Farsoon has also announced that it has added 100 staff members to take its total global workforce up to 400 in the first half of 2021. With these appointments, the company has added to its technology development, technical support and manufacturing teams.