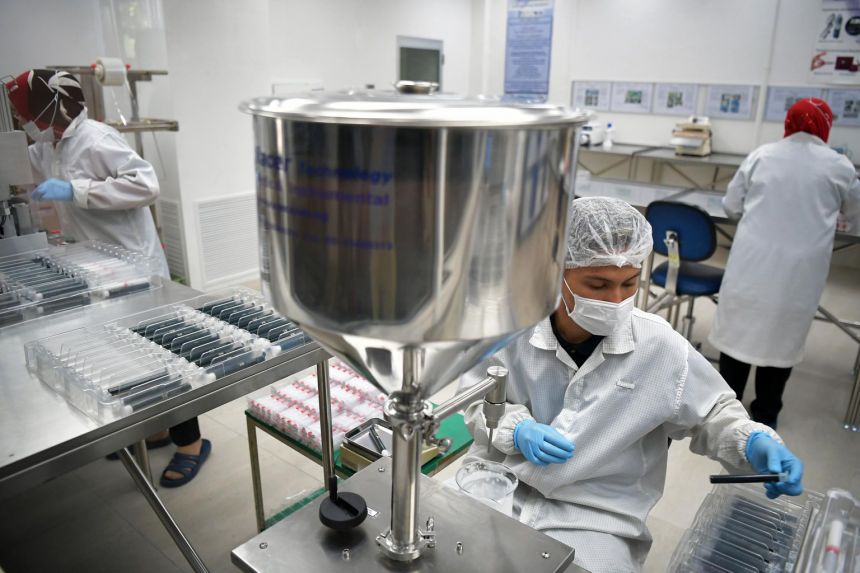 SINGAPORE - Manufacturing output in Singapore recorded an eighth straight month of growth last month, boosted by a low base a year ago amid Covid-19 restriction measures.

Industrial production expanded 27.5 per cent year on year, just above the 27.2 per cent median estimate in a Bloomberg poll and the adjusted 27 per cent growth seen in May.

Excluding the volatile biomedical manufacturing segment, output climbed 24.8 per cent, according to data released by the Economic Development Board on Monday (July 26).

Continued demand for semiconductors and related products should continue to support the overall manufacturing sector in the coming months, even if the growth momentum slows as favourable base effects subside, analysts said.

The biomedical manufacturing cluster recorded an output growth of 42.5 per cent on a year on year basis last month, with the pharmaceutical segment boosted by higher production of active pharmaceutical ingredients and biological products. The medical technology segment increased 37.5 per cent due to higher export demand for medical devices.

Biomedical production grew 5 per cent in the first six months of the year, compared with a year ago.

Singapore's key electronics output was higher by 26.2 per cent compared with a year ago, with all segments, except infocomms and consumer electronics, expanding. Its growth was led by the semiconductors segment which rose 28.2 per cent, supported by demand from cloud services and 5G markets.

Precision engineering production grew 22.2 per cent year on year, with the machinery and systems segment's 28.6 per cent expansion bolstered by greater output of semiconductor and industrial process equipment.

Chemicals output rose 30.6 per cent compared with a year ago, with the specialities and petroleum segments seeing significant growth. This was due to low production a year ago with plant maintenance shutdowns and weaker export demand amid the Covid-19 outbreak.

UOB economist Barnabas Gan said besides the growth in electronics and precision engineering as a result of resilient global demand for semiconductor-related products, economic recovery in Singapore’s key trading partners, amid a global rebound, should also support the chemicals cluster for the year ahead.

But downside risks remain, he cautioned, noting that a prolonged slack in production in some of Singapore’s major trading partners, which are still facing high Covid-19 infections, could dampen trade demand and limit export and manufacturing growth in the coming months.

OCBC Bank's head of treasury research and strategy Selena Ling said given the low base effects last year amid strict Covid-19 measures, manufacturing growth momentum should be sustained in the near term.

“Moreover, there appears to be more light at the end of the tunnel, with the multi-ministry task force indicating that they would review existing measures and the Covid-19 situation in early August," she added.

When businesses can largely return to normal operations without having to shut down premises for deep cleaning, that "could bode well for business sentiments going ahead, especially if border restrictions are relaxed", she said.

Meanwhile, transport engineering was higher by 28.3 per cent, with the marine and offshore engineering and aerospace segments benefiting from the low base a year ago amid movement restrictions and Covid-19-related slowdown in activities.

General manufacturing output was up 17.4 per cent compared with a year ago.

The miscellaneous industries segment leapt 62.2 per cent from a low base last year, when production of construction-related materials was affected by movement restrictions at foreign worker dormitories. This outweighed declines seen in the food, beverage and tobacco, as well as printing, segments. 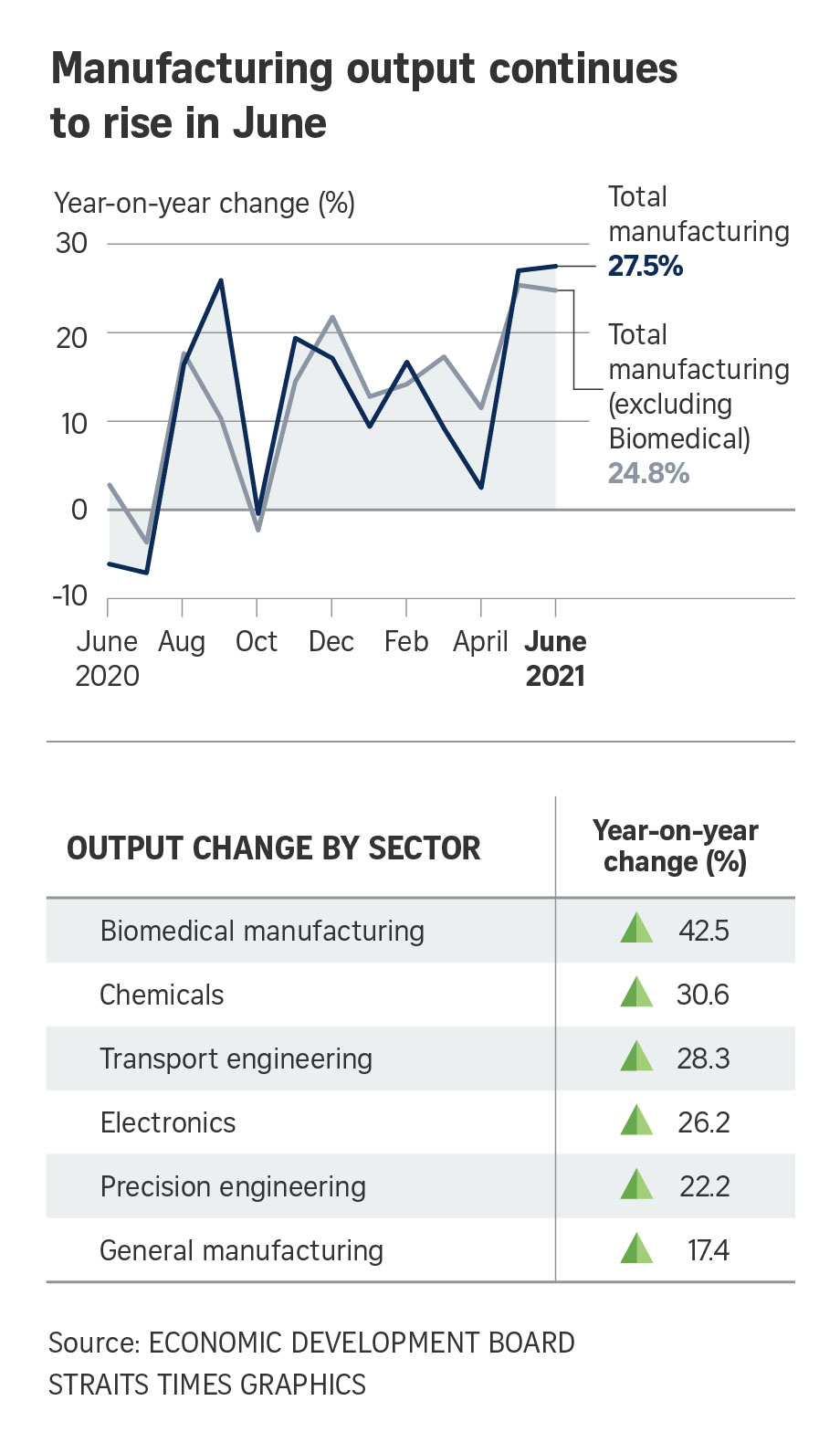