5G differs from previous mobile telephony standards in that this time round, consumers and smartphone users aren’t the main use cases. They will do just fine with 4G/LTE for a while to come. No, the main point of 5G is that it will meet a whole lot of c

With the 5G spectrum auction now underway and local frequency blocks soon to be allocated to industrial users, commercial availably of 5G is just around the corner. The big promises made by the technology suppliers and communications service providers are one thing; the applications that might actually be relevant in industrial practice are another. What sorts of preparations are industrial users making for 5G? What are their expectations and requirements? HANNOVER MESSE visitors will find answers to these questions and more at the 5G Arena in Hall 16. Staged over five days, it comprises exhibits, an extensive forum program, panel discussions and a one-day conference. To help whet your appetite and prepare you for your visit to the arena, we’ve taken a look at the answers that market researchers and technology analysts have been coming up with in their surveys and interviews. Following are some of the key insights gained regarding industrial users of 5G.

5G is the driver of the Internet of Things

In May and June 2018, Gartner surveyed a panel of 185 companies. The panel was non-representative, but the results, outlined in the Gartner’s latest “5G use case and adoption survey”, are corroborated by what other analysts are saying in their interviews. According to the survey, the most commonly named target use case for 5G is IoT. Two thirds of the companies surveyed indicated that they have plans deploy 5G-based IoT applications by 2020. Here, in descending order, are the most commonly mentioned 5G use cases:

The report’s author, Sylvain Fabre, a senior research director at Gartner, expressed surprise at the high score for IoT communications, given that other proven and cost-effective technologies, such as LTE-M and Narrowband IoT, already exist for wireless IoT connectivity. “However, 5G is uniquely positioned to deliver a high density of connected endpoints – up to 1 million sensors per square kilometer,” he said.

Will industrials have to do 5G for themselves?

One major concern that industrial companies have, however, is that the public networks operated by communications service providers will not be geared to the needs of industrial users. Fabre believes these concerns are warranted. He anticipates that most providers will initially focus on consumer broadband, and that functionalities like core network slicing – which allows physical networks to be split into multiple customized virtual networks – and investment in the back-end infrastructure required for edge computing and mobile cloud won’t happen until later. According to Fabre, this complete end-to-end 5G infrastructure won’t be achieved until sometime between 2025 and 2030.

In the interim, industrial firms will have no choice but to plan for internal applications using their own private 5G networks. Gartner therefore recommends that vendors of 5G infrastructure cater to this segment and quickly bring the necessary solutions onto the market.

Tech Pro Research is another organization that wanted to know what companies were planning on the 5G front. In an online survey of 164 professionals that it conducted between December 2018 and January 2019, 80 percent of the respondents indicated they are planning to adopt 5G by 2020. Introducing new technologies, such as IoT applications, analytics and smart power grids, was the main reason (54 percent) given for adopting 5G. The next most common reason was the prospect of increased productivity due to faster mobile data transfers (50 percent), followed by wanting to be at the cutting edge of technology (34 percent), and expectations of reduced data spending (27 percent).

On the other hand, very few respondents believe that adopting 5G will be easy. Two thirds indicated that their existing infrastructure is not ready for 5G and will need to be either upgraded or replaced. Therefore, 57 percent of respondents are looking at overhauling their network infrastructure, and 36 percent are getting their most important business applications ready for cloud-based access.

The current auctions have also reignited the debate around whether 5G can replace WiFi, and possibly other proprietary networks, in indoor applications. In terms of objections to 5G, we’re seeing the usual suspects: It’s just an attempt by communications service providers to gain more control over data communication. Or: WiFi is tried and proven; it will survive the advent of 5G just as it survived the arrival of 3G and 4G. Or even: To enable indoor 5G, you’d have to create a dedicated antenna infrastructure for every single provider.

But one key difference between 5G and previous new mobile data standards is that this time, advocates of switching from WiFi to mobile actually have some pretty solid arguments on their side. For one thing, past experience shows that WiFi is constantly developing and evolving. While this makes possible regular increases in data transfer rates, the benefits come at the cost of fairly frequent hardware changes, not to mention high installation and testing overheads. Another argument in favor of 5G is that attempts to combine data and voice communication using Voice over WLAN (VoWLAN) commonly result in a loss of quality.

With 5G networks, on the other hand, unifying different communication standards is genuinely promising, especially with networks based on local frequencies, because then data and voice can be carried on a single physical network. In addition, with network slicing, you can partition a physical network into multiple virtual networks, each optimized for different applications.

Narrow-band data transfers from vast arrays of sensors, high-volume transfers to local clouds for subsequent analysis, time-critical, low-latency control functions in robotics, AI-assisted image analysis and machine learning using edge computing. All of these applications can run in parallel with voice telephony on 5G. What’s more, subsequent changes to the 5G standard can be rolled out via software updates, rather than hardware upgrades.

The time for 5G is now

The launch of 5G may come sooner than many people think – possibly even as soon as the second half of this year. It is a technology that offers unbeatable benefits for industrial users, so now is the time for industrial firms to start planning their next step in the Industry 4.0 journey.

And the best place to gather the necessary information and make those all-important contacts is the 5G Arena in Hall 16 at HANNOVER MESSE. Visitors will find information about 5G technology itself, examples of industrial applications of 5G, and a wealth of ideas for taking their production and customer services into the 5G age. Comprising an exhibition featuring real-life use cases, a conference and a forum, the 5G Arena provides unrivalled opportunities for technology providers and users to meet and talk. 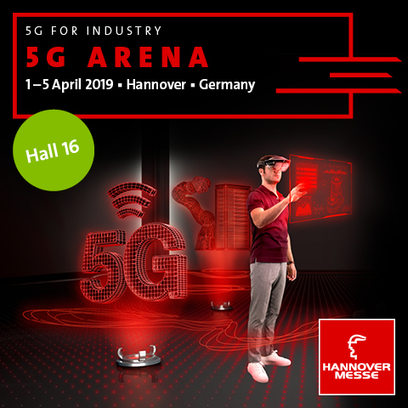 At HANNOVER MESSE 2019 you could visit 5G Arena on-site and learn more about the latest products and services. more